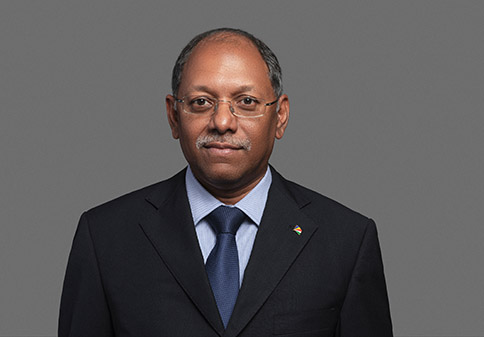 Vice President of the Republic of Seychelles

Mr. Ahmed Afif was born on the 6th January 1967. He is married with one child. After completing his studies at the Polytechnic in 1987 he joined the Central Bank of Seychelles where he helped to enhance the existing systems and improve the work output as a Clerk.

In 1989 Mr. Afif was awarded a Scholarship and attended Warwick University in the UK, where he later graduated with a Bachelor of Science in MORSE (Maths, Operational Research, Statistics & Economics) in 1992.

After graduating he returned to Seychelles and worked for the Department of Industry and later joined a task force set up in 1994 under the Central Bank of Seychelles to advise the Government on the setting up of an International Business sector for Seychelles.

In 1995 he joined the newly offshore authority, SIBA before moving on to the Department of Finance, the Vice-President’s Office and later on the President’s Office undertaking various functions including economic policy and day to day running of the Government.

In 2008, he was instrumental in helping Government design and implement a major macro-economic reform involving major fiscal and monetary reforms and went on to serve the Ministry of Finance until 2012. In the years to follow, Mr. Afif worked in the private sectors as a business and financial consultant. In September 2016, he was elected as a member of the National Assembly for the District of Anse Etoile. As well as representing the District of Anse Etoile on the National Assembly, Mr. Afif is also the Vice Chairperson of the Finance and Public Accounts Committee.

Mr. Afif was elected as the Deputy Speaker of the national Assembly on the 6th March 2018.

He was sworn in as Vice President of the Republic of Seychelles on 27th October 2020.