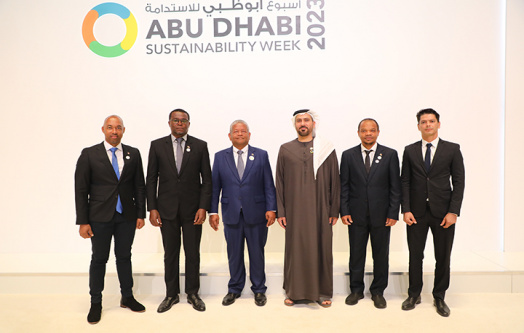 On Monday the delegation attended the Opening Ceremony held in the presence of many Heads of State, High-level officials and dignitaries from around the globe. Other African Heads of State and Government present at the event included Angola, Mozambique, Namibia, Palau, South Korea, Azerbaijan, Uganda, Ethiopia.

The official Opening Ceremony marked the kick-off for ADSW, bringing the world’s sustainability community together and setting the agenda for the discussions and debate in the week to come.

This event is attended by over 4,000 global delegates, from world leaders and senior policymakers to business leaders, scientists, and academics.

The Zayed Sustainability Prize Award Ceremony also held alongside the opening ceremony was established in 2008 and is the UAE’s pioneering global award for recognising excellence in sustainability. Launched at the 2008 World Future Energy Summit, by H.H. Sheikh Mohamed bin Zayed Al Nahyan, President of the United Arab Emirates, the Prize is a tribute to the late Sheikh Zayed bin Sultan Al Nahyan’s legacy of humanitarianism and commitment to sustainability. The Zayed Sustainability Prize recognises nonprofit organisations (NPOs), small and medium sized enterprises (SMEs) and high schools for their impactful, innovative and inspiring sustainable solutions across the categories of Health, Food, Energy, Water and Global High Schools.

Apart from the main events, the Seychelles delegation is also taking part in the various forums and thematic sessions being held as part of ASWD 2023.