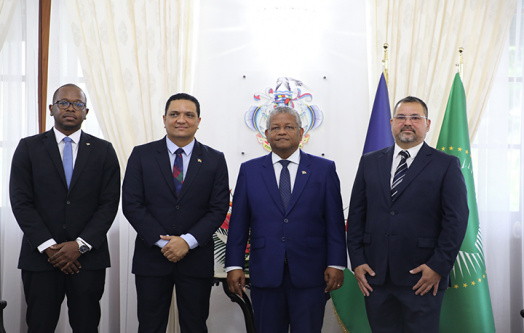 The President presents three new Ambassadors with Instruments of Appointment

The President of the Republic, Mr. Wavel Ramkalawan welcomed Ambassador Kenneth Racombo, Ambassador Georges Tirant and Ambassador Gervais Moumou in their new capacities as ambassadors at State House yesterday morning. This follows the recent approval of their appointment by the National Assembly. Their nomination and appointment are in accordance with Article 64 (1) of the Constitution.

President Ramkalawan presented the three Ambassadors with their Instrument of Appointment and congratulated them as they officially embark on this new journey of their professional careers.

“I wish to congratulate you on your appointments and I have no doubt that you have the necessary expertise and capabilities to discharge your new duties to the best of your abilities. I wish you well in your tasks ahead, there will be challenges, but rest assured of my continuous support and that of the Department of Foreign Affairs,” said the President.

On their part, the newly appointed Ambassadors expressed their appreciation to the Head of State for the confidence extended to them and reaffirmed their commitment to further advancing the country’s diplomatic agenda.