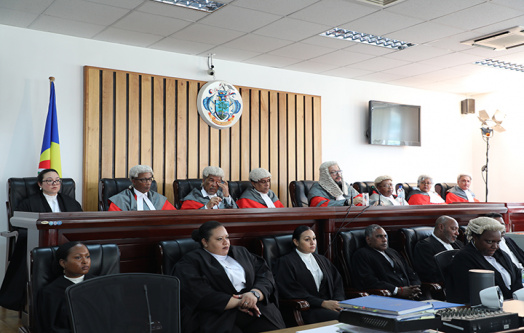 President Ramkalawan attends the re-opening of the Seychelles Supreme Court

The President of the Republic, Mr. Wavel Ramkalawan, the First Lady. Mrs. Linda Ramkalawan and the Vice-President Ahmed Afif attended the annual ceremonious events to officially launch the re-opening of the Seychelles Supreme Court, yesterday morning.

The President and Mrs. Ramkalawan first attended a religious service accentuated under this year’s theme, ‘The Judiciary - Justice First’, held at the St Paul’s Cathedral, conducted by Archbishop Emeritus French Chang-Him, Reverend Danny Elizabeth, and Reverend Bryan Volcère of the Anglican Diocese and Bishop Alain Harel of the Catholic Diocese.

The mass was followed by the ceremonial parade through town, led by the National Brass Band which ended at the Victoria gymnasium, where there was a motorcade to the Palais de Justice.

The Head of State and Mrs. Ramkalawan then attended the ceremony at the Palais de Justice where the Chief Justice of the Supreme Court of Seychelles, Mr. Rony Govinden delivered his address.

Chief Justice Govinden highlighted that the Judiciary will remain committed to remaining independent and impartial at all times “relentlessly to defend our independence and impartiality. I give my guarantee that I will defend our autonomy at all levels, and that I will seek to preserve all acquired rights without discriminations. In that respect, I thank all those who endeavours to work within our constitutional remits and to safeguard our most precious constitutional framework. We are all here temporal, but the constitution is eternal”.

The Chief Justice also spoke about the confusion expressed by some individuals in relation to the separation of powers between the Executive and the Judiciary. He underlined the major rules that govern the appointments of Judges, removal from office at the request of disciplinary tribunal as well as the power of pardon among other important powers that are exercised by the Head of State.

“Besides this, he is also the head of the Government and the Commander in Chief of the Military forces. It makes sense therefore that as Head of State he is invited, on this occasion, to hear what we have to say. This does not affect the separation of powers between the Executive arm of the government and the Judiciary, because as the Head of State he is not here as representative of the Government and the Executive, and he is not intruding upon judicial powers. We need to be able to understand, cherish and appreciate these subtleties enshrined in our Constitution. It is to be noted that similarly the Judges are invited to the opening of the National Assembly and the inauguration of the President. His presence here does not constitute an interference, same as my presence at the Presidential inauguration and the National Assembly would not. It is a sign of mutual respect,» said the Chief Justice Govinden.

He also addressed the media practitioners where he stressed on their role in relation to the judiciary and the importance to be more committed to informing the public about the work of the judiciary and cases that are heard. He described journalists and other members of the media as, “vital partners in ensuring that the rule of law is maintained in our democracy.”

Chief Justice Govinden also touched upon their achievements for 2022, namely improved infrastructure, increased in legal training for judiciary officers introduction of cost-effective technologies in order to improve their service delivery, and the appointment of more legal practitioners and notaries.