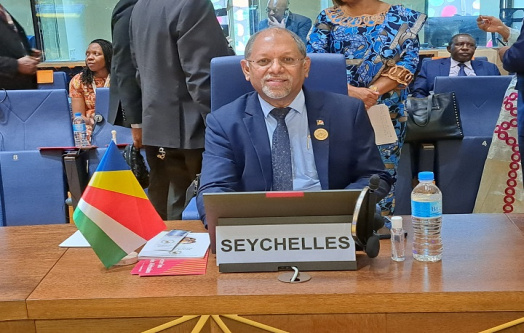 The Vice President, Ahmed Afif, attended the Extraordinary Summit of the African Union on Industrialization and Economic Diversification in Africa and the Extraordinary Ordinary Session of the African Union on the African Continental Free Area on the 25th November, 2022, in Niamey, Niger.
The Theme of the Summit was “Industrializing Africa: Renewed Commitments towards an Inclusive and Sustainable Industrialization and Economic”. The Summit considered the Report of the joint meeting of the Ministers of Industry and Economy that took place on the 7th November 2022, in Niamey. The meeting also considered and adopted the Declaration and Decision of the AU Extraordinary Summit on Industrialization and Economic Diversification.
Summit also took note of the progress made so far on the African Continental Free Trade Area and adopted a Draft Decision of the Extraordinary Session on the African Continental Free Trade Area and three Operational Tools namely: AfCFTA E-Tariff Book, AfCFTA Rules of Origin Manual and the AfCFTA Guided Trade Initiative.
The Vice President was accompanied by Mr. Charles Morin, Trade Consultant in the Ministry of Finance, National Planning and Trade.
The Vice President returned to the country on Sunday 27th November, 2022.