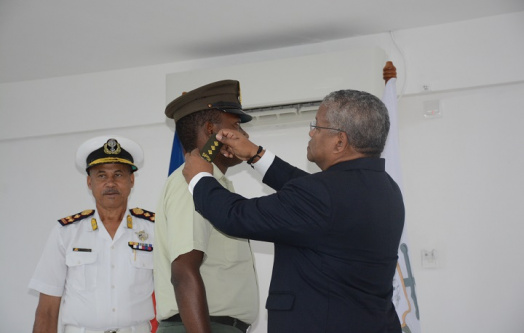 The President of the Republic of Seychelles and Commander-in-Chief of the Armed Forces, Mr. Wavel Ramkalawan, attended a ceremony to commemorate the Defence Forces Day 2022, yesterday morning at the Seychelles Defence Forces Academy, Ile Perseverance. The celebrations is being held under this year's theme, ‘United and Focused towards a Common Goal’.
The President had honour to promote servicemen who have met all requirements to ascend to their next rank. Officers who were promoted by the Commander in Chief included Major Dave Mathieu, Captain Marlon Charlie, Captain Stan Tomking, Captain Denis Jeremie Captain Luigi Loizeau, and Captain Edwin Constance.
Other highlights of the ceremony were the unveiling of the SDF logo, Flag and website which is part of their rebranding exercise.
During his address, the President congratulated all servicemen and servicewomen as they celebrate their day. To those promoted, he reminded them of the added responsibilities and that the country continues to depend on them to serve the country diligently whilst doing their utmost to give back to society.
“I am immensely encouraged following the last two years of working with the Seychelles Defence Council and all our SDF officers. With the new Seychelles Defence Council there is a new sense of duty and I want to wish you all the very best. I have no doubt that we have capable officers in the Council and as for other servicemen and women, we are satisfied with how you are all making progress and continuing to grow as a force,” said the President.
He continued, “I want to congratulate all the Commanders of the different Units on how you are coordinating with one another which has brought positive results. This has also expanded on the international level where you have succeeded in your different missions”.
He called upon the SDF recruiting team to intensify their efforts to have more young people to join the forces as their future is bright.
The Chief of Defence Forces, Brigadier Michael Rosette reaffirmed SDF's mandate to preserve, protect and defend the constitution and to strive to maintain the highest level of standards in their duty, discipline and loyalty.
During the ceremony participants of the Battle feel 3.0 competition also received their prizes, with  the Tropical Heat 1 team coming out first place.