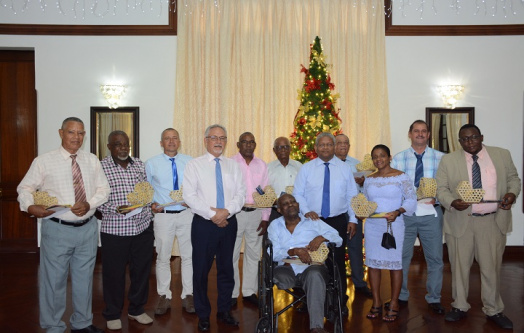 To commemorate World Fisheries Day, which is celebrated worldwide on the 21st of November each year, President Wavel Ramkalawan presented ten former and present fishermen on Praslin and Mahé who have worked for a long time in artisanal fishing in Seychelles with a shield as a token of appreciation for their contribution in the fisheries sector. The recognition ceremony was held at State House this afternoon in the presence of the Designated Minister and Minister for Fisheries, Mr. Jean-François Ferrari.
President Ramkalawan thanked them for the valuable contribution that they make, not only in the fisheries sector but also by providing nutritional needs and food security to the communities. The President expressed his wish that they continue to inspire and empower the Seychellois communities, especially the young people.
Through their interaction with the Head of State, they had the opportunity to share with him their experiences as well as challenges, which the President has noted.
To conclude, the fishermen expressed their heartfelt gratitude for being received by the President and presented him with a token of appreciation.
Those present were Mr. Seebert Rose, Mr. Simon Gabriel, Mr. Albert Napier, Mr. Claude Nicole, Mr. Andre Barbier, Mr. Davidson Morgan, Mr. Richard Bossy, Mr. Paul Camille, and the late Mr. Rolly Tambara was represented by his daughter Merna.