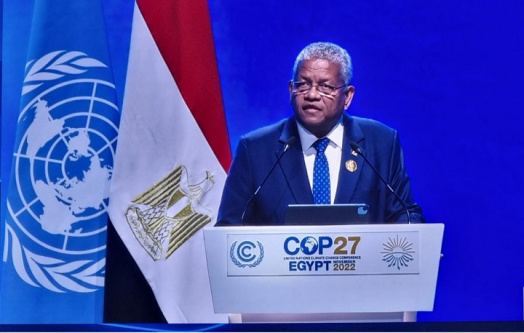 The President of the Republic, Mr Wavel Ramkalawan, is currently leading the Seychelles delegation at the World Leaders Summit taking place during the 27th Conference of Parties of the United Nations Framework Convention on Climate Change (UNFCCC) in Egypt.

President Ramkalawan joined over 100 Heads of State and Government present for the official opening ceremony. Commitments and plans for concrete climate action resonated during the World Leaders National Statement segment.

As the fourth Head of State to address the summit, President Ramkalawan began his statement by expressing Seychelles’ support and solidarity with all nations that have experienced the terrible effects or have been severely affected by climate change.

In stating the claim that this COP27 is echoing the resounding theme of nations coming ‘Together for Implementation’ for global action, President Ramkalawan reminded the world of the numerous conferences and previous un-actioned commitments made and hoped that after COP27 strong and urgent actions are taken to address the issues of Climate change.

“Is COP a counting game(26, 27, 28…) or a real countdown to saving our planet? I pray that we leave Sharm el-Sheikh, the city of peace, with a real peace pact with our planet and with good decisions and pledges that will be followed by concrete actions instead of another set of promises that take forever to materialise,” said President Ramkalawan.

“Like other islands, we contribute less to the destruction of the planet, yet we suffer the most. For example, the carbon emissions of Seychelles are very low, and we clean up our emissions and those of the world through our mangroves and seagrass meadows, thus making us a zero contributor to the destruction of the planet, yet our islands are disappearing and our coasts are being destroyed”

The Head of State also announced that in 2023, “Seychelles will further contribute in mitigation by moving to 100% protection of all its mangroves and seagrass meadows, adding to the already 32% protection of our ocean and 50% of our land mass.”

The President underlined the importance for the Multi Vulnerability Index (MVI) and the vulnerabilities of the Small Island States (SIDS), particularly the plight of Seychellesin getting access to concessionary financing in order to address challenges due to the impact of climate change. He urged the industrialised nations that contribute to such impact to respect the MVI so that the SIDS can be assisted.

“We insist that the Multi Vulnerability Index (MVI) should be the new order. SIDS are vulnerable and we need access to concessionary financing in order to defend ourselves against climate change, while fulfilling the SDGs to give our people a better life. Industrialised nations must pay greater attention to the Loss and Damage agenda. We, the oceanic states that receive the harsh effects of your activities have to be assisted in repairing the damage you cause to us,” said the President.

The Head of State also expressed how Seychelles, as a small country, is playing a leadership role and building strong partnerships. The President referred to the hosting of the Ocean Race Summit to discuss the urgency of saving the ocean, the European Blue Invest Summit held for the first-time outside Europe to put emphasis on financing the Blue Economy and the visit of Prince Albert of Monaco and the Monaco research expedition in the search for resilient corals. He noted that Seychelles is also actively promoting the Great Blue Wall project.

“Let us be good partners, let us give our youth a better planet and may we leave Egypt with enhanced hope and commitment to save our one and only blue planet,” President Ramkalawan concluded.