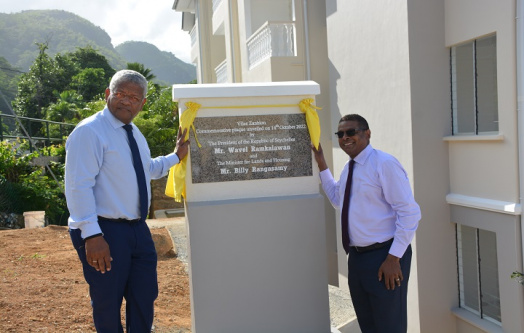 President Wavel Ramkalawan accompanied by Vice-President Ahmed Afif attended the official opening of the Vilaz Zanblon Housing Estate at Petit Paris, Cascade, yesterday afternoon. The highlight of the event was the formal unveiling of the commemorative plaque by the President and the Minister for Lands and Housing (MLH), Mr. Billy Rangasamy, to officially declare the estate open.

During the ceremony, 23 families registered in the Cascade district were handed over the keys to their new house.

The opening of the 24 unit coincides with the Habitat week being celebrated in the month of October worldwide promoting the theme ‘Leave No One and Place Behind’. The Estate was built by Allied Builders (Seychelles) Limited and came at a total cost of 38.5 million rupees that also comprises a sewerage treatment plant, car parks and a playground.

Speaking at the event, Minister Rangasamy reminded the importance for everyone to take their responsibility, plan their family, to be committed towards their contribution to be allocated with a house and encouraged the residents to honour their housing payments. He underlined the importance of good neighbourhoods in the community. Furthermore, for them take ownership and to appreciate investment by government to provide housing to its people, to improve their quality of life, creating space for families to grow and ameliorate the way that they live.

He also informed the invitees that the Ministry is planning to build 56 units as part of further redevelopment on the same site for affordable housing that will benefit the residence of Cascade. Under the Mid-range Condos scheme, the Minister announced that his Ministry is working on a project for the middle income earners at the ex SLTA in that same district.

Following the opening event, President Ramkalawan was given a tour of the Estate where he managed to see the two blocks of flats constructed and met with families.

The ceremony was also animated by the MLH Choir and pupils from the Cascade primary school.

The ceremony was also attended by the Minister for Local Government and Community Affairs, Mrs. Rose Marie Hoareau, other members of the Cabinet of Ministers, Member of the National Assembly for Cascade, Honourable Philip Monthy, other members of the National Assembly, Principal Secretaries, CEO’s, DA for Cascade district, Begita Melanie and other distinguished guests.