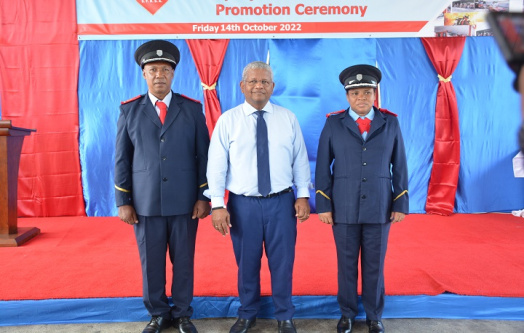 The President of the Republic, Mr. Wavel Ramkalawan, was the guest of honour at the promotion ceremony of the Chief Fire Officer and the Deputy Chief Officer, held at the headquarters of the Seychelles Fire and Rescue Services Agency (SFRSA), New Port Road yesterday morning.

Ms. Domingue then had the honour to promote Mr. Jones Madeleine as the new Deputy Chief Fire Officer. Mr. Madeleine has served the SFRSA for 26 years.

In his remarks, President Ramkalawan congratulated both Ms. Domingue and Mr. Madeleine on their promotions, which he said had been on merit after that they have proven themselves and delivered to the highest level in their duties. He further extended his personal support and that of the Government as they take on the new roles.

“Today, you take on these noble responsibilities, described as a vocation.  As you take on the new role as the Chief Fire Officer, take the lead and continue to work as a team. Encourage and inspire your staff. As for you Mr. Madeleine, I know that you love your work and capable of discharging your duties, continue the good work. As firefighters, you all have a very important role; to protect properties from fire, and save lives, the country is depending on you all. I wish you both courage and success,” said the President.

He reiterated the necessity for prevention and training. Furthermore, better collaboration between agencies and departments so that they can assist the SFRSA.

The ceremony was also highlighted by remarks by Minister Fonseka, who described Ms. Domingue as, “A competent professional with extensive knowledge of the different aspects of fire safety such as fire administration, risk and disaster management, enforcement of established fire code regulations, policies and procedures regarding fire suppression, investigation and prevention as well as hazardous material response. She has also been greatly involved in the formulation of policies, development of manuals and plans relating to the elimination of fire risks. And having worked closely with the office of the former CFO has given her insight to the different functions and responsibilities required at managerial level. It is the holder of these qualities who we are promoting today, who happens to be a woman. It is said that women in leadership roles can help restore balance and wholeness to our communities”

“Mr. Jones Madeleine shows a high level of discipline and commitment to his work. He possesses substantial knowledge and skills in different aspects of fire safety such as fire suppression, prevention, inspection and investigation, road traffic accidents as well as hazardous material response. He has also played a significant role in the formulation of internal policies, rules and regulations as well as the development of the SFRSA’s strategic plans,”

In her address, Ms. Domingue said that she is humble and honour to have been given the opportunity to continue to serve the SFRSA. She underlines that over the years that she has been in service, she has taken it as a vocation and not as a job in view that the responsibilities bestowed upon her colleagues and herself are for the betterment of others.

“Personally, I want to see the service flourish and become what it’s meant to be; a beacon in fire safety and discipline. Leading on the work, and legacy of my predecessors of past Chief Fire Officers that have formed me throughout my twenty-five years in service. I am proud of the accomplishments of this service and I look forward to working and furthering our vision and mission,” she said.

There were also remarks by the outgoing Acting Chief Fire Officer, Regis Bethew.

The ceremony was also witnessed by the Vice President, Mr. Ahmed Afif, Ministers, the Commissioner of Police, Mr. Ted Barbe, Chairperson and members of the Defence and Security Committee in the National Assembly, Principal Secretaries, Management and staff members of the SFRSA and other distinguished guests.