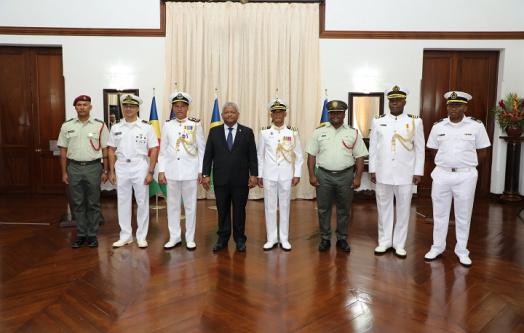 The President of the Republic of Seychelles and Commander-in-Chief of the Armed Forces, Mr. Wavel Ramkalawan, had the honour to appoint and promote six Seychelles Defence Forces officers. This auspicious ceremony was held at the State House this morning.

The appointments and promotions come after these SDF officers have strived continuously in the service of their country and its citizens through hard work. They have been awarded after they have met all the requirements to ascend to their next ranks. These requirements include without exception, years of uninterrupted service under a specific rank, compulsory courses required to qualify for the next rank category, maintenance of a high level of discipline and professionalism, a high level of personal health and fitness, and above all maintaining a high-performance level throughout their career. The higher ranks bestowed on them will come with higher responsibilities.

In his remarks, President Ramkalawan congratulated the SDF Officers on their appointment and promotions. He underlined the importance of their new responsibilities and noted the challenges ahead in protecting the sovereignty of the country and its people. He called upon all service men and women in uniform to uphold their professionalism, discipline, loyalty and to continue the journey towards achieving service excellence. The President reaffirmed his continued support as they forge ahead.

The President took the opportunity to compliment the SDF Chief of Defence Forces, Brigadier Michael Rosette for the way he is leading the force and commended all the units of the armed forces for the good collaboration that exists among them and extended that to the Seychelles Police Force, which they have been able to accomplish different missions collectively so far.

The President also thanked the Former Chief of Staff, Colonel Simon Dine for his long years of service and dedication.