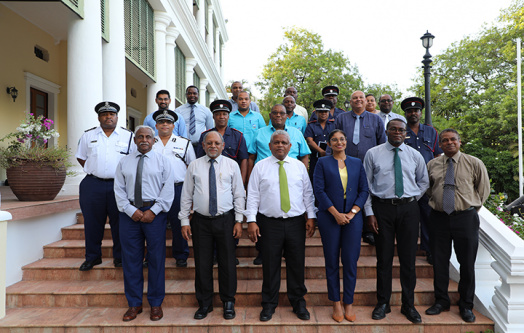 President Wavel Ramkalawan accompanied by the Vice-President Ahmed Afif chaired the post-mortem meeting following the recent landfill fire that occurred at Providence last month. The meeting held at State House brought together all the relevant authorities and agencies directly involved in the incidents.

Before opening the floor for discussions, the President on behalf of the country and on his personal behalf conveyed the sincere appreciation to everyone who worked tirelessly or in one way or another provided their support during the three-day landfill fire incident.

“We are extremely grateful for all your hard work. Some members of the different teams were on site for long periods with limited rest in between shifts in order to ensure the fire could be placed under control. Even when I visited the site, I admired your determination and courage. Once again thank you. Today we meet first and foremost to identify key weaknesses and come up with pragmatic solutions for the way forward and I look forward to fruitful contributions and frank deliberations,” said President Ramkalawan.

Discussion centred on the key issues raised such as operational breakdowns, communication challenges as well as individual limitations experienced by each of the agencies involved during the fire incident.

The meeting was also an opportunity for each entity to put forth actions and proposals required to remedy the situation and ensure any future incidents are tackled in a more synchronized manner with greater collaboration between agencies and departments.

Following this initial discussion, agencies present have been tasked to devise concrete actions and decisions agreed upon during the meeting whereby feedback on all actions proposed is set for the next meeting on 27th October.