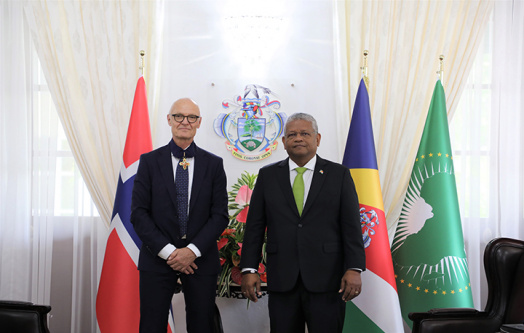 The President extended a warm welcome to Ambassador Holm on his first visit and congratulated him on his accreditation as the new Ambassador of the Kingdom of Norway to the Republic of Seychelles. He expressed his hope that it marks a new beginning to further boost cooperation between the two countries.

The discussion between the Head of State and Ambassador Holm centered on areas to further reinforce the diplomatic ties between Seychelles and Norway based on mutual respect and elevate engagements to new heights in sustainable ocean economy, tourism, and environment conservation efforts.

On the international arena, they both reciprocate commitment to address issues of common interest and to remain central in discussions across diverse multilateral platforms such as climate change and the challenges of the Small Island Developing States (SIDS).

Following his accreditation, H.E Ambassador Holm also paid a courtesy visit to the Vice-President, Mr. Ahmed Afif. Diplomatic relations between Seychelles and Norway were established on 1st February 1985. Ambassador Gunnar Andreas Holm will be based in Nairobi, Kenya.