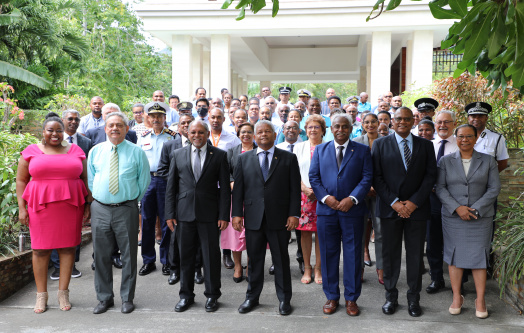 The President of the Republic, Mr. Wavel Ramkalawan attended the launching ceremony of the Operationalization of the National Integrated Emergency Management Plan (NIEMP), which took place at the Savoy Seychelles Resort & Spa, Beau Vallon yesterday morning.

This event has been facilitated by the World Bank with the Seychelles Government, supported by the Climate Risk and Early Warning Systems (CREWS) Initiative. The Crews Initiative; is a specialised agency of the United Nations whose mandate covers weather, climate, and water resources.

The World Bank delegation is undertaking a 2-week mission since 1st to 12th August 2022 in Seychelles in order to provide technical assistance to the Disaster Risk Management Division (DRMD). The World Bank technical assistance will focus on enhancing emergency coordination at Ministries, Departments, and Agencies (MDA) level and turning early warning into effective early actions. There will be training sessions that will cover two main components; namely, training of specialist support staff who will be the dedicated Disaster Risk Management (DRM) Focal Point from key MDAs to support decision makers for DRM coordination. These Focal Points would be expected to eventually lead the development of Standard Operating Procedures (SOPs) and Contingency Response Plans for their MDAs.

Secondly, building the capacity of key decision-makers within MDAs to better comprehend their roles in supporting disaster response and recovery operations.

In his opening address, the Minister for Internal Affairs, Mr. Errol Fonseka stated that the National Integrated Emergency Management Plan, outlines the way forward for all stakeholders to develop their sectorial plans according to their functions as lead and support agencies in five functional areas that includes Rescue and Security, Health, Humanitarian Services, Essential Infrastructure and Services, and Emergency Management.

He called on all stakeholders to see the urgency to implement the development of plans and SOP’s for Risk Reduction based on existential changes happening around the world that have a direct impact on the country’s security and safety.

“It is true that ownership for the development of Plans and SOP’s for Risk Reduction do rest with the respective portfolios, however, I hasten to add that we at DRMD, will be by your side at all times to help in its development. These functions will have to be operationalized in order to meet the expectation of the government to lower disaster risks by implementing an effective collaborative approach to reduce effects of multi-hazard events,” said the Minister.

The World Bank Task Team Leader, Ms. Keren Charles reiterated that the main focus of the technical assistance is on enhancing emergency coordination at Ministries, Departments and Agencies level by turning early warning into effective early actions. “Training sessions to empower specialist support staff who will be the dedicated Disaster Risk Management (DRM) Focal Point from key MDAs and key decision-makers within MDAs will be given knowledge to better comprehend their roles in supporting disaster response and recovery operation,” said Ms. Charles.

Also present at the ceremony yesterday morning was the Vice-President of the Republic of Seychelles, Mr. Ahmed Afif, the Speaker of the Seychelles National Assembly. Hon. Roger Mancienne, Ministers and DRMD team.