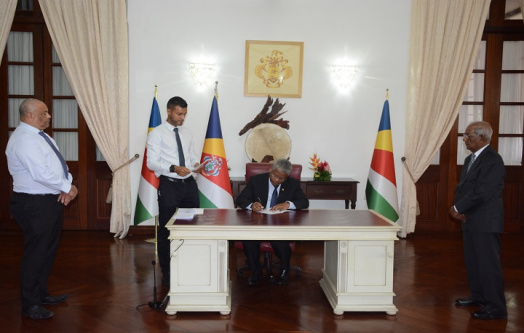 President Ramkalawan assents to the Probates (Re Sealing) Act, 2022 and Law Commission Act, 2022

The President of the Republic, Mr. Wavel Ramkalawan has assented to two Acts, which included the Probates (Re Sealing) Act, 2022 and Law Commission Act, 2022 during a ceremony held at State House this morning.

The President first assented to the Probates (Re-sealing) Bill, 2022 which provides for the resealing of probates and letters of administration granted by a court of probate in a country listed in the Bill, in respect of the estate of a deceased person and other matters related to it.

The President assented to the two Acts witnessed by the Attorney General, Mr. Frank Ally, and the Law Revision Commissioner, Judge Ranjan Perera.

During his statement before assenting the two Acts, President Ramkalawan thanked the Attorney General’s office and all the relevant stakeholders who have worked on the two Acts for the National Assembly deliberations. He emphasized that the two new laws further highlights the direction that the Government wishes to take in modernizing the Seychelles legal system.