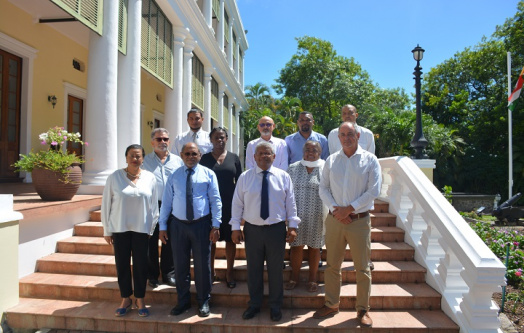 President Ramkalawan meets the new Board of SBC

President Wavel Ramkalawan accompanied by Vice­-President Ahmed Afif met the new Board of the Seychelles Broadcasting Corporation (SBC). The meeting took place at State House this morning following their appointments in June 2022.

The President congratulated the Chairperson of SBC, Mr. Gerard Lafortune, and all members as they start their new mandate and underlined the importance for him and the Vice-President to chair this meeting with the new board.

“It is a great pleasure for us to meet with you today as you commence your new term as SBC Board members. We fully respect the independence of SBC but it is important for us to have this discussion and see how the Executive can support you in raising the standards of SBC by providing news coverage that is balanced and fair, improving the work of journalists, and raising the standard of productions as well as programmes,” said President Ramkalawan.

Mr. Lafortune thanked the President for meeting with the Board, and expressed their willingness  to take up this responsibilities tasks ahead. He briefed the President on their goals and strategic objectives such as improving the local news content and current affairs. The meeting was an opportunity for the Chairperson and his members to put forward challenges that SBC is facing in order for it to implement its core visions, motivation as well as principal challenges to retain and give remuneration to their employees. Furthermore, Mr. Lafortune put forward a proposal for the SBC representatives to hold a series of meetings with all Ministries in order to better understand their portfolios and the different programmes or events that they will require SBC provide media coverage, which as a result will also allow the SBC to ensure credible information is disseminated.

In ending, the President welcomed the proposal put forward of the board and underlined that the Government is committed to working with SBC in order for them attain to their objectives. All other points raised have been duly noted by President Ramkalawan and Vice-President Afif for further consideration with follow-up actions to be taken where necessary.