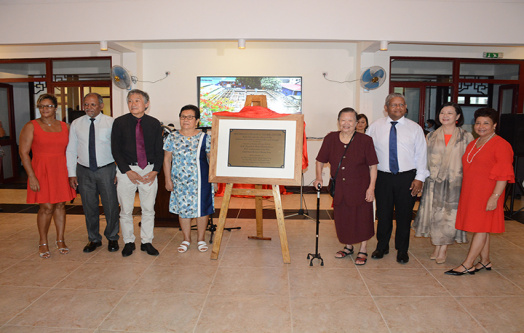 The President of the Republic, Mr. Wavel Ramkalawan, and the First Lady Mrs. Linda Ramkalawan was the guest of honour at the official opening ceremony of the Seychelles Chinese Cultural Centre, Benezet Street, Victoria yesterday evening.

Addressing the ceremony, President Ramkalawan congratulated the Chinese community on this important milestone which he underlined was filled with difficulties.

“I wish to congratulate you on the completion of this Centre. The old Pagoda building was indeed a landmark for all Seychellois and here I want to also thank the late Charlie Ng Ping Cheun who was the former chairman of the Chinese Association of Seychelles for his never-ending determination and for the energy he put into this project so that we can have this new landmark. That goes also for the present chairman of the association and all the members. On behalf of the government, I would thank the Chinese community for all that you have contributed to making this country what it is today. This Centre is part of our culture, let’s keep growing our culture,” said President Ramkalawan.

On his part, the chairman of the Chinese Association, Mr Robert Chong Seng traced back to the foundation stone of the new pagoda, laid in February 2014 during the first Seychelles-China day celebrations. He commented on the challenges they had to face to see its completion, which included a severe lack of funds, requesting financial assistance, and raising funds restlessly, among others. Mr. Chong Seng took the opportunity to thank the Chinese Ambassador, Mrs. Wei Guo for her devoted assistance throughout the construction of the Centre.

The Chinese Ambassador has described the opening of the Centre as a historic moment for Seychelles, which symbolizes a new start for the Chinese community.

The ceremony was highlighted with the cutting of the ribbon by the President, Ambassador Guo, Chinese elders, the chairman of the Chinese Association and other Chinese representatives. There was also the unveiling of the opening plaque by two Chinese elders.

During the ceremony, there was also a Tai Chi demonstration. The Centre catered for Tai Chi classes every Friday from 4:30 p.m. whereby the public can join.

After the ceremony, President Ramkalawan and First Lady Ramkalawan along with other distinguished guests toured the Centre where they were able to see exhibitions on the first and second floors. The exhibition highlights certain milestones in over 100 years of Existence of the Chinese Association and its precursor the KHUM FOCK FOOY QUOON (Cantonese and Fukienese society). It centres on the old Pagoda and its replacement; Seychelles Chinese Cultural Centre.

The Centre also caters for the Pagoda Art and Design, which aims to provide a platform where arts and design works are more accessible to visitors and residents; and where creatives can be rewarded with financial returns from sales of their work.

Also present at the ceremony was the Vice President of the Republic of Seychelles, Mr. Ahmed Afif, and Mrs. Stella Afif, the Chinese community in Seychelles and other invited guests.