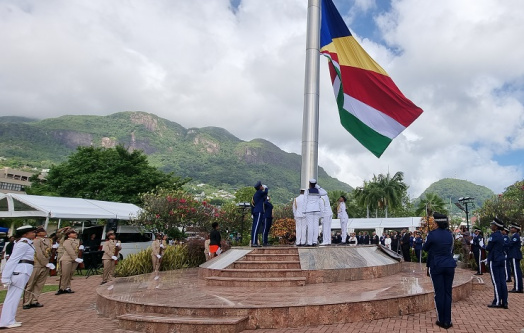 The President of the Republic, Mr. Wavel Ramkalawan accompanied by the First Lady Mrs. Linda Ramkalawan along with various high-level officials gathered at the  ‘Lavwa Lanasyon’ monument yesterday morning to celebrate the 29th anniversary of Seychelles’ Constitution Day.

Delivering his address for the occasion, President Ramkalawan stressed on the importance of the Constitution and the essence of democracy that derives from it that continues to protect the rights of the country as a sovereign democratic nation and its peoples.

“On this auspicious day, we celebrate our constitution. We have once again reaffirmed our belief in democracy that our constitution will continue to guide us as it also protects the rights of each and every citizen. This is what we have affirmed and this is the message we want the world to know. Seychelles is a democratic state, and that Seychelles will respect every citizen and every foreigner on our land, and at the same time through the democratic processes and the way that we make laws and the way that the judiciary acts, and above all how the executive performs its functions it will always respect the rights of every single citizen,”  said the President.

Also present were the Vice President of the Republic of Seychelles, Mr. Ahmed Afif, and Mrs. Stella Afif, the Speaker of the National Assembly, Hon. Roger Mancienne, the Chief Justice of the Supreme Court, Justice Rony Govinden, Acting President of the Court of Appeal, Justice Fiona Robinson, the Designated Minister and Chairman of the National Celebrations Committee, Mr. Jean-Francois Ferrari, Ministers, the Leader of Government Business in the National Assembly, Hon Bernard Georges, Members of the Diplomatic Corps, the Attorney General, Mr. Frank Ally, the Commissioner of Police, Mr. Ted Barbe, the Chief of the Defence Forces, Brigadier Michael Rosette, the Director General of the Seychelles Intelligence Service, Mr. Benediste Hoareau, Members of the National Celebrations Committee and other distinguished guests.

The day was also commemorated by flag raising ceremonies on the other two largest islands of the archipelago, Praslin and La Digue for the first time accompanied by the Seychelles Band and Military parade as well as various performances by Seychellois youths.