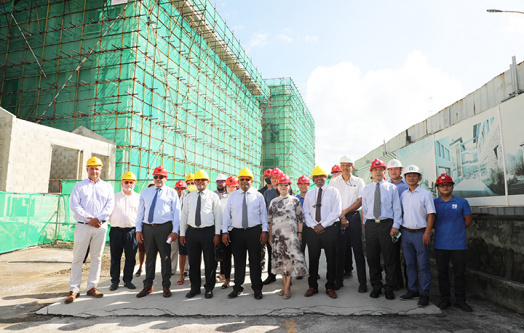 President Wavel Ramkalawan accompanied by a high-level delegation visited the construction site of the new building for the Seychelles Broadcasting Corporation (SBC) located at Union Vale this morning.
The SBC House is being financed by a grant from the Chinese government and is being undertaken by Hunan 6 Engineering Com. Limited at an estimated cost of R206 million.
The President was welcomed on site by the Chinese Ambassador, Mrs Wei Guo along with a team of technicians. He was briefed on the concept of the project, the main components of the building as well as the extent of construction works so far. Following the briefing the delegation then toured the premises under the guidance of the technical team.
The visit provided them with a first-hand view of progress of the project, opportunity to review and discuss previous challenges raised and agree on the new timeline ahead for the completion of the project.
The SBC House project which started in December 2018 includes a five story building of a total 5600m2 which will include a full-fledged broadcasting and television center.
Despite the COVID-19 Pandemic being one of the key constraints in delaying the project for almost 2 years, following today’s visit the Chinese Ambassador Mrs Wei Guo reaffirmed the commitment of the Chinese Government for the completion of the project. Finishing works has now been accelerated in order to ensure the handing over is done on time confirmed Ambassador Guo.
On behalf of SBC the Chairman of the SBC board of directors, Mr Gérard Lafortune said despite the challenges and delays the management and staff of SBC are looking forward for the project to be completed, along with the benefits this new building will bring for their operation.
Also present for the visit was the Vice-President, Mr Ahmed Afif, the Minister for Foreign Affairs and Tourism, Mr Sylvestre Radegonde, the Minister for Land and Housing, Mr Billy Rangasamy, Chairman of the SBC board of directors, Gérard Lafortune, other Members of the SBC Board, the CEO of SBC, Mr Bernard Dupres, the CEO of Seychelles Infrastructure Agency, Mr Jitesh Shah, the Deputy CEO of SBC, Ms Cindy Wirtz, the Project Officer responsible for the project Mr Dereck Rioux, project technicians and other key officials.