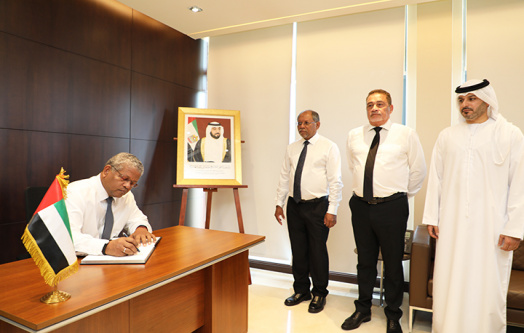 Following the passing of His Highness Sheikh Khalifa Bin Zayed Al Nahyan, President of the United Arab Emirates yesterday, the President of the Republic of Seychelles, Mr Wavel Ramkalawan formally conveyed his sympathy through the signing the condolence book, this morning at the UAE Embassy in Victoria.

The President was accompanied by the Vice-President Mr Ahmed Afif and the Minister for Foreign Affairs and Tourism, Mr Sylvestre Radegonde who also conveyed their condolences. Also present was the UAE acting chargé d'affaires, Mr Abdulla Alketbi.

In his message of sympathy the President wrote:

He will be remembered as a sterling leader who not only influenced the development of the UAE, but also helped in making the world a better place. The strong ties of friendship between our two nations were solidified through his personal love for our people and land. We will forever cherish his contributions”

The President will travel to the UAE this evening, to attend the official funeral ceremony of His Highness Sheikh Khalifa Bin Zayed Al Nahyan.