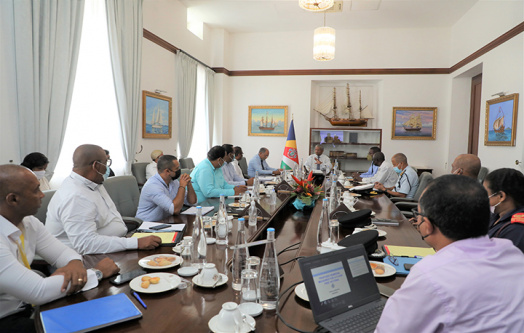 President Wavel Ramkalawan chaired a follow up meeting this afternoon at State House, in the presence of all relevant stakeholders to review the status of proposed remedial actions and progress attained so far vis-a-vis the flood mitigation plan for Victoria. At the start of the meeting, representatives of key departments and agencies reported on actions undertaken as well as provided inputs on how to better chart the way forward based on their findings.

The first meeting was convened by the President on March 24, following a flooding incident in Victoria due to heavy rainfall on March 11. The monthly consultations permits all the relevant technicians to meet and ensure better coordination of actions. The forum will also be key in the drafting of an effective national mitigation plan that will ultimately ensure such flooding incidents are not repeated in Victoria as well as in any other flood prone locations.

During discussions, the technicians  briefed the Head of State on their initial assessments from the last meeting, scopes of works completed or where required identify new actions. The meeting this afternoon was also a platform for all agencies and departments present to agree on which agency will lead specific actions and time frame of execution. This will in return ensure short-term remedial actions proposed are being addressed and other medium and long-term measures to follow are considered for future implementation.

Following the meeting, the President expressed his gratitude to all the technicians present for their inputs and the efforts placed by all the various teams on the ground to ensure the remedial actions proposed were executed in a timely manner. He further stressed on the importance of regular dialogue by all the entities present and how the essence of the collaborative approached witnessed over the past few weeks to tackle the issues of flooding should remain as a regular way of working together to mitigate issues in our communities.

The next follow up meeting will be held end of May, for a review of actions undertaken and an update of the way forward.