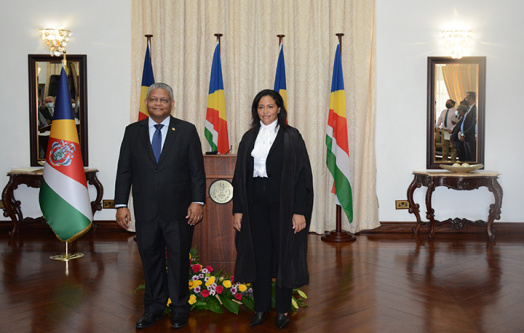 Judge Andre Sworn in as Justice of the Court of Appeal

Judge Samia Andre was sworn in as the Justice of the Court of Appeal in the presence of the President of the Republic Mr. Wavel Ramkalawan during a swearing-in ceremony yesterday morning at State House. Her appointment follows recommendations made to the President by the Constitutional Appointments Authority pursuant with Article 123 of the Constitution of the Republic of Seychelles.

During the ceremony, Judge Andre took two oaths; the Oath of Allegiance to the Constitution and the Judicial Oath. In 2004, Ms. Andre was appointed as the Registrar General in the same Department. Ms. Andre is not new to the Seychelles Judiciary; she has previously served in the capacities of both Magistrate and Senior Magistrate. On 8 February 2015, she was appointed Puisne Judge in the Supreme Court to date.

Speaking during the ceremony, the President congratulated Justice Andre on her achievement and urged the younger generation to make full use of the opportunity available in the judicial field.

“I wish you the very best in the new task ahead. I have no doubt that you will discharge your new duties to the best of your abilities. I am hopeful that as we continue to work together to build the Seychelles that we all want to see everyone must continue to work hard

Speaking to the press after the swearing-in ceremony, Justice Andre said although the journey has not been easy she is proud of what she has achieved and she takes on these new responsibilities she will continue to uphold the very principles of justice as her guide.