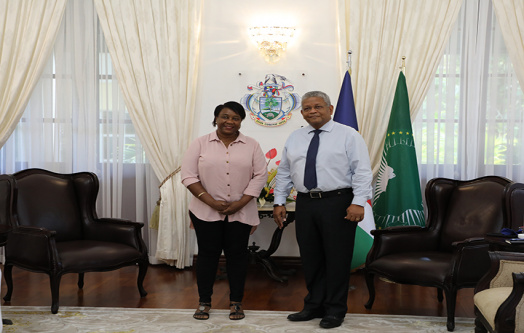 To note, Ms. Valentin is the first Seychellois woman to reach that level with an international hotel chain where she currently oversees 65 staff at the hotel with 30 rooms divided into three categories.

The President congratulated her on her achievement and urged Ms. Valentin to continue persevering. The Head of State described Ms. Valentin as an inspiration to all and as a reflection of what can be achieved through hard work.

The meeting with the President was an opportunity for Ms. Valentin to share her career paths, experiences, and her plans for the future as she rises up the professional ladder.

Ms. Valentin started her career as a secretary in the former Department of Business Studies. Then she continued as a secretary in the former Ministry of Employment when she acquired more skills. She then applied for the same post in the Human Resources Department at the Le Meridien Barbarons where her career path started in the tourism sector. She was then transferred to Le Meridien Fishermen’s Cove where she worked for over 14 years in Human Resources. Since then she has worked in various other places until she joined the Hilton Seychelles Resort and Spa where she followed different trainings and was promoted to different posts until today.

She was accompanied at State House by her mother and brother.