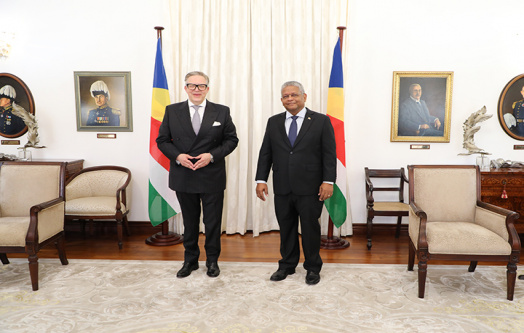 President Ramkalawan congratulated Ambassador Tapiola on his new role and expressed his hope that it marks a new beginning to further consolidate the warm ties between Seychelles and Finland.

“I wish you the very best during your tenure in office. This accreditation ceremony marks a new beginning to further enhance our bilateral cooperation and bring it to greater heights. Seychelles and Finland share areas where we have common interests such as renewable energy, sustainable development, Small Island Developing State (SIDS), as well as other bilateral projects. We are committed to unearthing other areas of cooperation,” said President Ramkalawan.

Speaking to the media after the ceremony, Ambassador Tapiola said that his tenure would be an opportunity to foster closer ties and strengthen the diplomatic relations between Finland and Seychelles.

“Finland and Seychelles are like-minded in many areas such as sustainable development, human rights, democracy. During my time in the office I do hope to deepen our relationship and look at other opportunities in both the economy and in the political corporation, as well as in building a greener better future,” said Ambassador Tapiola.

Ambassador Pirkka Tapiola is based in Nairobi, Kenya.

Diplomatic relations between Seychelles and Finland were established on 27th March 1987.