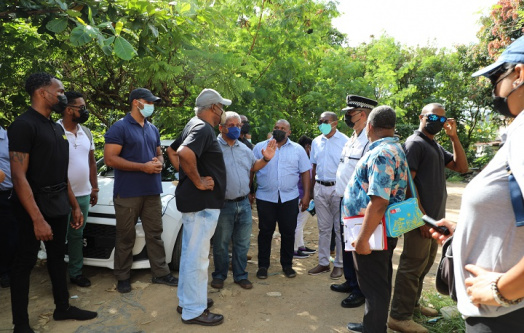 President Wavel Ramkalawan today conducted a follow-up visit at key locations at Corgat Estate, Mont Fleuri, including the Rochon River which borders this estate as well as some of the residents affected by flooding during the heavy rains which occurred earlier this month.

Following the meeting held at State House this week, the delegation along with the technical team had the opportunity to further brief and show the President immediate, medium-term, and long-term solutions related to the issue of flooding in that area. Immediate action includes boundary walls, removing obstacles in rivers, desilting and re-building the bridge next to the Mont Fleuri police station.

Particularly in the Corgate Estate premises, the President affirmed that drastic measures need to be taken immediately to give this place a cleaner environment by removal of garbage causing pollution and other large debris. He stressed that there is a need for a more holistic approach involving the efforts of all residents.
The visit was also an opportunity for residents to meet the President personally share their experience following the flooding and raise their concerns.

In an interview with the local press after the visit, President Ramkalawan said that this visit on-site was important so to see for himself actions that needs to be taken immediately and meet the families. Moreover to also express appreciation to those who have helped in one way or another during the flooding including the residents, contractors, the district authorities as well as all organizations and individuals.

“I want to commend all those who have given a helping hand during the flooding. Their sense of solidarity is extraordinary and for this, I want to congratulate them. The next stage is to implement the projects that will mitigate the issues that caused flooding in that area so that the residents can feel secure,” said the President.

The President also spoke about the housing re-development project for Corgat Estate where he confirmed that this is ongoing.

President Ramkalawan once again pronounce himself on the fight against drugs and asked the residents of Corgat Estate to protect their community and not to accept such activity.

The delegation this morning included technicians from the Ministry of Land Use and Housing, Property Management Company, Seychelles Infrastructure Agency, and the Environment. Also present were the MNA for Mont Fleuri, Honourable Michel Roucou, and District Administrator for Mont Fleuri, Mr. Steve Noel.