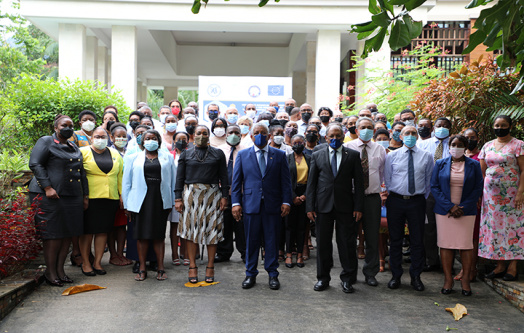 The President of the Republic, Mr. Wavel Ramkalawan delivered the Keynote address at the official opening ceremony for the workshop on the Sexual and Gender-based violence for Seychelles Parliamentarians themed “Improving National Coordination of Legislative and Procedural Response to SGBV in Seychelles”, held this morning at Savoy Seychelles Resorts and Spa, Beau Vallon.

The two-day workshop is being organized by the National Assembly of Seychelles (NAS) led by the Women’s Parliamentary Caucus in collaboration with Seychelles’ Attorney General’s Office, Family Affairs, Police, with the support of the Southern African Development Community (SADC) Secretariat and funded by co-partner European Union. The workshop is aimed at updating the Members of Parliament (MP) on the situation of SGBV in the country, discussing the national legislative and policy framework, enabling or creating barriers against violence, identifying gaps, for the fulfillment of the human rights of all persons experiencing SGBV, especially women and girls.

And also to familiarize all MPs with SADC SGBV legislative frameworks and tools, and discuss possible legislative actions and Motions to address identified gaps in reducing or eliminating SGBV in Seychelles.

Through the work of the NAS, various local agencies, the assistance provided by the SADC as well as the European Union, President Ramkalawan as the guest of honour, in his address, commended all participants for their collective commitments in eliminating sexual and gender-based violence.

As an African country, we turn to the chorus of the anthem of the African Union. The words of the anthem should really touch our hearts ‘O Sons and Daughters of Africa, Flesh of the Sun and Flesh of the Sky, Let us make Africa the Tree of life’. It doesn’t talk about disunity, violence but it’s all people coming together and this should guide us as we gather today for this 2-day workshop,” said the President.

President Ramkalawan spoke highly of the National Assembly of Seychelles for the laws that they have passed and expressed hope that through the Women’s Parliamentary Caucus under the leadership of its Chairperson, Hon. Regina Esparon, that they will continue to guide the country.

“As a way of moving forward, instead of having just a women’s caucus, may I suggest that it is extended to male parliamentarians just like at the Southern African Development Community Parliamentary Forum (SADC PF), where they also include men so that it becomes gender-based. The statistics that we have just heard, clearly indicate that both men and women are subject to the violence that we are talking about,” he said.

President Ramkalawan continued by highlighting that this workshop also touched on the fundamental human rights of everyone and places emphasis on the word respect and how from a very young age, we should teach our children to show respect.

The Head of State also spoke about the different forms of violence, not only here in Seychelles but across the continent, including physical violence, genital mutilation, bullying, child marriage among others.

“Unfortunately on our beloved continent we still have other forms of violence which we will have to fight against and Seychelles is prepared in its small way and through this workshop again as we better understand the different forms of gender-based violence we should ensure that such does not happen in our country,” said the President.

To conclude the President expressed hope that the presence of the Attorney General in the workshop, will help the participants to better understand the different laws and to make recommendations on how they can be improved.

“As leaders of this country, I count on you to lead and sensitize our people to maintain standards that will help restore, in some instances; the harmony that we long for and transform our society and our people into a peace-loving people.”