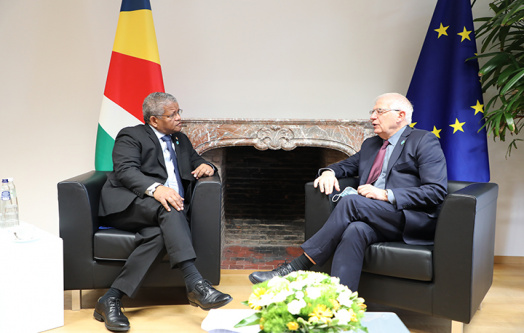 Brussels, Belgium Saturday 19th February 2022:Whilst on mission in Belgium, President Wavel Ramkalawan also held talks with the High Representative of the European Union for Foreign Affairs and Security Policy / Vice-President of the European Commission, Mr Josep Borell, on Friday.

The Head of State thanked Mr. Borell for the significant role that the European Union has played in helping Seychelles in its development, especially in providing technical support for strengthening the capacity of key government institutions. He noted how the Government of Seychelles greatly values the partnership with the EU in its fight against illegal and corruptive practices and in not only ensuring the security of the Seychelles archipelago but also that of the African continent.

“Having a secure Indian Ocean is essential to both the EU and Africa's prosperity. This is why it is in our collective interest to further strengthen our historical partnership in order to combat maritime crimes that pose a threat to international trade and shipping. We count on the support of the European Union in our efforts to combat illegal, unreported, and unregulated fishing, human trafficking, and the pollution of marine resources,” said President Ramkalawan.

During the meeting, President Ramkalawan and Mr. Borell also discussed avenues for other bilateral programmes as well as those that are ongoing, namely in Ocean governance and Blue Economy, Maritime Security and Illicit Drug Trafficking and other partnerships.

On his part, Mr. Borell reaffirmed the EU’s support for the priority matters raised by the Head of State and to continue this journey as partners of common interest for the sustainable development of the Seychelles and its people.