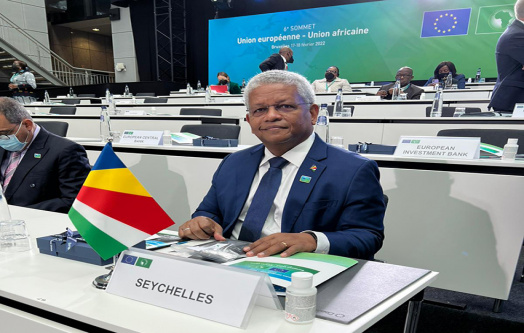 The President of the Republic, Mr. Wavel Ramkalawan participated in the 6th European Union-African Union (EU-AU) Summit, being held in Belgium. The Summit was an opportunity for African Heads of State and Government to meet their European counterparts and lay the foundations for a renewed and deeper AU-EU partnership at the highest political level based on trust and a clear understanding of mutual interests.

The two-day Summit was highlighted by a series of thematic roundtables.

In the Thematic Roundtables Session on Climate Change and Energy Transition, Digital and Transport (Connectivity and infrastructure), President Ramkalawan called for more decisive actions against climate change and underlined the vulnerability of the African continent as well as the Small Island Developing States. The President commended the European Union for their efforts in reducing greenhouse gas emissions and urged for urgent cooperation between the EU and the continent of Africa.

"I am happy to hear so many commitments being made again today, however, it is high-time we move to greater actions. Africa is calling out to Europe to take action. We have been waiting and the time for action is yesterday. As Small Island Developing States we are making great contributions to mitigate the effects of climate change and yet when we make economic progress we are labelled high income and we no longer qualify for assistance. We need to be considered for our vulnerabilities when seeking assistance," said President Ramkalawan.

President Ramkalawan underlined the importance for both sides to work together and to achieve tangible outcomes.

During the other round table sessions, the leaders deliberated on tools and solutions to promote stability and security through renewed peace and security networks.

Following the opening ceremony of the EU-AU summit yesterday afternoon, President Ramkalawan met and interacted with various Heads of State and leaders of international organisations.