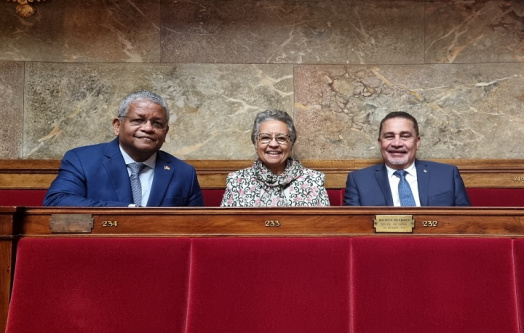 Whilst in Paris, President Wavel Ramkalawan and his delegation also had the opportunity to meet with Seychellois member of the French National Assembly, Mrs Monica Michel-Brassart who chairs the Groupe d’Amitié Seychelles\France.

President Ramkalawan availed of the opportunity to personally congratulate Mrs Michel- Brassart on being the first Seychellois to be elected in the French National Assembly.

“Seychelles is extremely proud of your achievement and on my personal behalf and that of Seychelles I wish to congratulate you for demonstrating that a daughter of a small island nation like Seychelles has the capacity to serve in the highest legislative institution in France. I wish you the very best for the future” said President Ramkalawan.

The President and his delegation had the opportunity to visit the National Assembly of France and through a dinner hosted by Mrs Michel-Brassart met and held discussions with other parliamentary members. A number of projects they are involved in were presented.