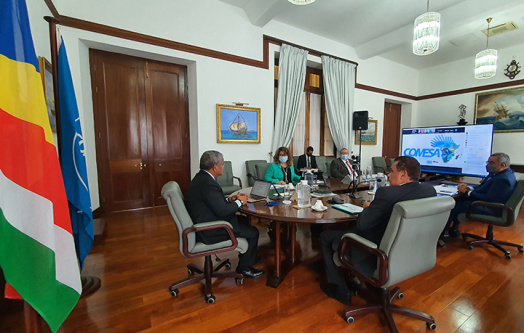 The President of the Republic, Mr. Wavel Ramkalawan virtually participated in the 21st Summit of the COMESA Heads of State and Government held in Cairo, Egypt yesterday, under the theme: “Building Resilience through Strategic Digital Economic Integration”.

The President strongly reaffirmed Seychelles’ position for regional economic integration by building strong partnership which can be beneficial for Small Island Development States.

“The appeal of having stronger regional and integrated economies gives us the confidence and capabilities to participate effectively in today’s volatile and competitive international markets. The creation of solid partnerships between countries in a particular region – and larger and more affluent markets outside our region – can definitely contribute to promoting standards and create incentives for member states to work together. COMESA represents a chance for us member states to build on our economic and social relationships, and this comes through our increased collaboration. Such relationships are critical for Small Island States like Seychelles because they alleviate the constraints inherent to the small size of our economies,” said President Ramkalawan.

The Head of State made mentioned of Seychelles’ ratification of the African Continental Free Trade Agreement in June of this year which he said has generated a lot of enthusiasm from the business community. He underlined that such an agreement will open doors for new products at competitive prices.

“Equally important is the fact that we can access a market of 1.2 billion people with a combined GDP of 2.5 trillion US Dollars. Our main export commodity is fish, and we have traditionally been exporting our fisheries products to the European market. In the absence of properly established mechanisms, exporting our fish to our own continent remained but an idea on paper.  The AFCFTA(AFTA) is the mechanism which will help to transform that idea into a reality,” said the President.

Though, President Ramkalawan noted that much remains to done as the concept for the AFCFTA has not resolve the difficulties of the continent’s integration. He also underlined that the COMESA’s has evolved over the years addressing issues of development, namely governance, peace and security, the environment, gender and social affairs among others. There, the President called for a “distinction be made between the trade aspect from the other components of our integration agendas so that the non-trade aspects of the current regional economic communities’ integration agendas can be supported and maintained going forward”.

The President continued by noting the importance to boost up the maritime trade links so that it becomes reliable and properly secured.

President Ramkalawan also spoke about the Small and Medium Enterprises (SMEs) which he stated play a significant role in the African economies. He further underlined that the SME’s forms the majority of businesses and are important contributors to job creation and economic development. He commended the Secretariat of the COMESA in supporting Seychelles’ initiative during the COVID-19 pandemic in its transformation to digitally-based economy and services.

The President also touched upon the COMFWB chapter in Seychelles which was launched on 31st August where he underlined how his Government takes great importance in assisting and empowering women in all facets of life, though he noted that more could be done so they can participate fully in the socio-economic development.

To conclude, though the economic challenges, President Ramkalawan underscored Seychelles’ commitment towards COMESA where he urged that it holds the values, principles and equal rights and opportunities for its members.

“We are working diligently towards ensuring that the multilateral system as a whole is credible, transparent and efficient. We believe that we need to uphold the virtues of equity and fairness where all members have equal rights and opportunities in our organisation. And this can only be achieved through meaningful, open and frank dialogue among us,” said the President.

The Summit was also highlighted by statements from other Heads of States and Governments as well as their deputies. The Summit appointed Libya as the Vice-chair of the Authority who will succeed Egypt as the next Chair at the end of their mandate.