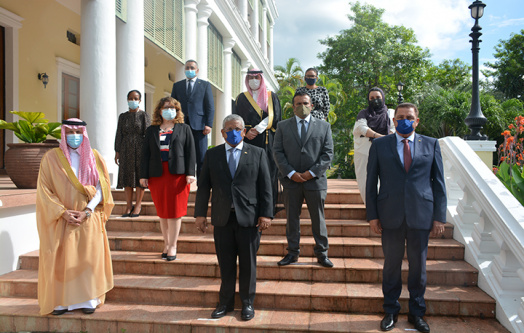 The President welcomed Minister Kattan to Seychelles and expressed his hope that this official visit serves as the start of a new dynamism to further strengthen bilateral relations between the two nations. On behalf of the Government and people of Seychelles, President Ramkalawan formally thanked the Kingdom of Saudi Arabia for the active role it had played in Seychelles’ socio-economic development, particularly through the Saudi Arabia Development Fund.

“Seychelles is keen to pursue and deepen our existing friendly relations with the Kingdom of Saudi Arabia. We welcome the opportunity to elevate our bilateral cooperation through this official visit, which will serve as a stepping stone to further strengthen the bilateral ties between our two countries” said President Ramkalawan.

For his part, H.E. Minister Kattan conveyed the personal greetings of His Highness King Salman bin Abdulaziz Al Saud to the President. H.E Minister Kattan also announced that the Kingdom of Saudi Arabia would be putting a financial package of 1 billion US dollars through the Saudi Arabia Development Fund at the disposal of countries of the African continent, whereby Seychelles, as a small island state could potentially access funding for key community projects.

Discussions also centred on how co-operation can be enhanced through different other sectors of mutual interest to both countries such as in the domain of tourism, investments, as well as security and defence among others.

After his courtesy call on President Ramkalawan, H.E. Minister Kattan met with other senior government officials for further dialogue.