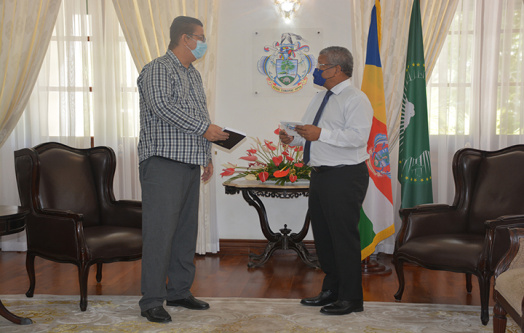 Mr Mondon presented President Ramkalawan with copies of his collection of published short stories entitled “En Tapi Pyeste” as well as ‘Sootina’s Story’ which was written by author Chris Feare but illustrated by Mondon himself.

The President congratulated, Mr Mondon on his literary achievements and encouraged him continue to contributing for the further advancement of the domain of literature in Seychelles.

“En Tapi Pyeste” is a collection of short stories based on various realities of life in Seychelles featuring themes such as love, violence and substance abuse among others.

Mr Mondon, 43 years of age, has been writing for over 2 decades and says his love for writing began at a very young age.

The meeting was also an opportunity to discuss future projects and share his aspirations with the Head of State.