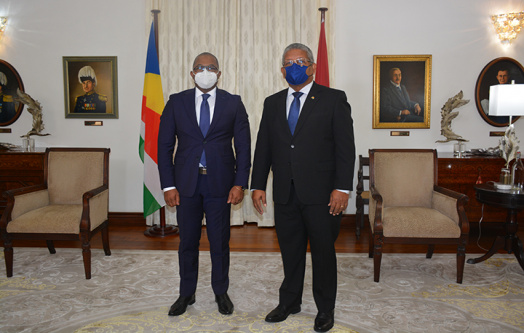 Third Angolan Ambassador accredited to the Republic of Seychelles

The new Ambassador of the Republic of Angola to the Republic of Seychelles, H.E. Mr Sandro Renato Agostinho de Oliveira, presented his credential to President Wavel Ramkalawan during an accreditation ceremony held yesterday morning at State House.

In welcoming H.E. Ambassador de Oliveira to Seychelles, President Ramkalawan congratulated him on his accreditation. The President expressed wish that this open a new chapter in the collaboration between Seychelles and Angola and I reassured him of his commitment to consolidate further the cooperation between the two nations.

During the meeting, President Ramkalawan and Ambassador de Oliveira discussed the current state of the relations between Seychelles and Angola and how to give a new dimensions to the cooperation between the two countries, with the aim of generating tangible reciprocal benefits in various domains, such as in entrepreneurship and private sector.

H.E. Ambassador de Oliveira is expected to meet other local dignitaries where further discussions on specific areas of cooperation will be explored.