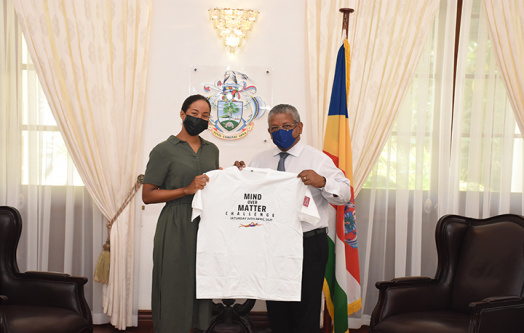 He first met the reigning Sportswoman of the year, Ms Passon who completed her 15 kilometre ‘Mind over Matter” Charity challenge by swimming the channel from La Digue to Praslin, and back. The President praised her once more for the amazing performance and encouraged her as Seychelles' top female swimmer to continue making Seychelles proud.

At the meeting, Ms Passon briefed the President on her training plan and preparation for the upcoming Tokyo Olympics.

President Ramkalawan then had a courtesy meeting with running enthusiast; Mr Joel Melanie who successfully completed the 21 kilometre run, on La Digue. This is Mr Melanie’s second phase of his project named; “Run for a good cause”.

The President remarked how Mr Melanie’s achievement should serve as an inspiration to other people, especially the youths and to follow in his path. President Ramkalawan noted how even at his age, but with determination, Mr Melanie has completed the challenge.

The long distance veteran athlete started the personal project in 2018 with the aim of raising funds for financially-struggling associations towards infrastructure development or other facilities to provide long-term support for Seychellois families and children. And during the meeting with the President, Mr Melanie spoke a bit about his project and future plans.

To both athletes, the President reiterated his continued support throughout their endeavours.