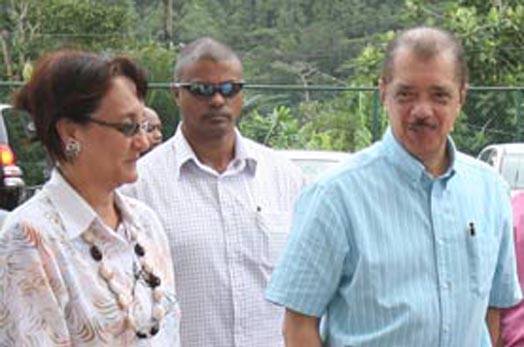 September 3, 2010 -- President James Michel has visited La MisÃ¨re School and the La MisÃ¨re Health Clinic to see the progress of the work being undertaken since his visit to the district in July.

In July La MisÃ¨re residents asked for additional health services in the district, as well as new piping for the schools, following the water pollution incident in the area.

The President viewed the re-plumbing work being carried out at La Misere School by the PUC, as well as the four tanks which have been installed to distribute water throughout the school. The work is expected to be completed by the start of the new school term on 13th September.

At the La MisÃ¨re Health Clinic, which is temporarily based at the Souvenir Community Centre, the President spoke to the doctors and nurses, and viewed the facilities.

The President said he was satisfied with the progress of the work being undertaken, and that the measures taken would benefit La MisÃ¨re community as whole.Â Â

The President also visited three families at La MisÃ¨re to hear their concerns, and views on the community issues.