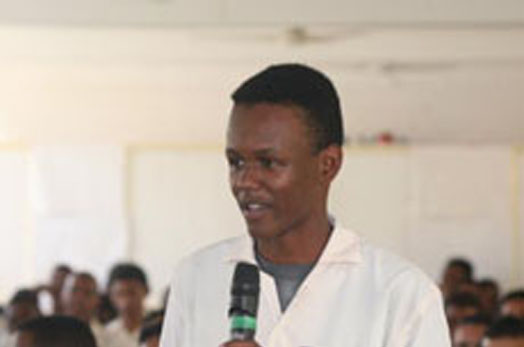 Dialogue With Youth Is Key To Development

August 13, 2010 -- "Continuous dialogue with the youth is very important for the development of the country. I believe in the youth and have confidence in their future. Seychelles counts on you for its future, and you can count on me as your President to support you."

President James Michel was speaking with the students of the Seychelles Institute of Technology yesterday as part of his ongoing visits to post-secondary educational institutions. The President was accompanied by Minister for Education, Employment and Human Resources Macsuzy Mondon and other senior government officials.

The visit coincided with the International Youth Day, underÂ  the theme "Dialogue and Mutual Understanding."

The President spoke to the students about their achievement and concerns. Students asked the President whether they would be considered for advanced studies, beyond their diploma-level courses in fields such as construction, motor vehicle engineering, plumbing, carpentry, and electrical engineering. The President reassured them that a programme is in place to meet their aspirations.

"We have a comprehensive programme to ensure that students who are taking technical subjects also have the opportunity to obtain scholarships for advanced studies abroad. We are going to intensify this programme, because in the future we will need more engineers, more lecturers for the institute and specialists in different fields of technology," said President Michel.

Several students asked the President to revise the student allowance system. The President has said a new system would be started, whereby secondary school S5 students would be assessed for their eligibility at the end of the year, so that delays in allowance disbursement may be avoided.

The President said that their requests would be considered in the due course, and that improvements would be made in the near future.

Following the meeting with the students, the President handed over the donation of 5 computers and printers to the SIT, on behalf of the Children's Fund.