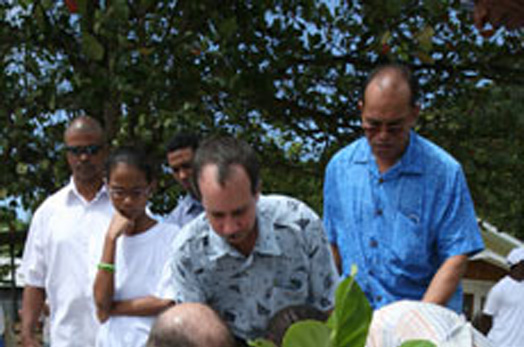 This followed the signing of the Designation Order by the Minister for Home Affairs, Environment, Natural Resources and Transport Joel Morgan.

Silhouette island is the third largest island of the inner granitic group of the Seychelles archipelago. The government has designated 93% of the island as protected area, or otherwise known as a national park.

"It is an event that is not only historic, but it is also the pride of the Seychellois people. We have managed to increase our leadership in conservation in the world. Since Seychelles now has 47.19% of its land territory declared as protected areas, this continues to keep us as the leader in the region and a leader in the world," said President Michel.

Seychelles has the highest percentage, in the world, of its land territory declared as protected areas for nature conservation. The second country after Seychelles is New Zealand which has 30% of its land area protected under law.

"I think what is important is not only to have the island declared as a conservation area, but also the Islands Development Company must organise for Seychellois to come and visit the island and also encourage children and wildlife clubs and other organisations to come and see the beauty of this biodiversity that we have. We must all have the opportunity to appreciate it and to maintain it, to be sure that we protect it for future generations."

This legendary island isÂ  known for its dramatic mountain peaks andÂ  for being one of the richest biodiversity hot-spots in the western Indian Ocean. It is home to many endemic and threatened plant and animal species and has large areas of primeval forest, mist forests as well as breathtaking viewpoints.
Silhouette has five mountain peaks; Mont Dauban (740m), Mont-Pot-a-Eau (621m), Gratte Fesse (515m) Mont Corgat (502m) and Mont Cocos Marrons (500m).
The island is home to last known Seychelles sheath-tailed bats, and is an Important Bird Area and is also an important site for the survival of critically endangered species.
The Seychelles archipelago has a total land surface area of:45 500 hectares (excluding reclaimed area).

With the new declaration of the new Silhouette National Park area, the total land area under protection now stands at 21,471.53 hectares.