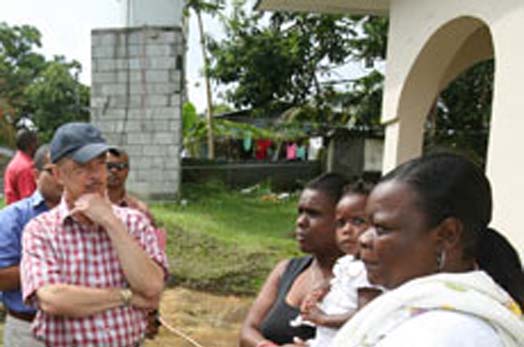 August 2, 2010 -- Following his visit to La Misere on Saturday morning, President James Michel has announced the Government will be setting up a temporary clinic in the Souvenir Community Centre.

" Six months after the water pollution incident, the residents of La Misere are still suffering very much. Many residents have called for greater support from the health services. We will set up a health clinic where residents can come for regular screening, diagnosis and treatment. They need to be monitored for the next three years, given that the infections they have can reoccur in that time," said President Michel following the visit.

The President was accompanied on the visit by the Vice-President Danny Faure and the Minister for Home Affairs, Environment and Transport, Joel Morgan.

The residents had asked the President to visit them this week, so that he could see the extent of the suffering they are undergoing. The President visited six families that are experiencing severe medical conditions as a result of the water pollution. Many of the families said that the children had been particularly affected, and that they were continuing to get problems with accessing water at school.

President Michel said that PUC would replace the water pipes at the schools, so that the students do not continue to come into contact with contaminated water, and that teachers do not have the extra load of carrying water from the PUC bowser. This re-piping work will be undertaken during the school holidays.

"The schools and daycares will also have new health screenings, to monitor which children are in need of additional care. We have to ensure that the most vulnerable are treated as soon as possible."

The President said that while he was able to see the gravity of the health concerns of the La Misere residents on this visit, he would be going back to visit La Misere in the near future.