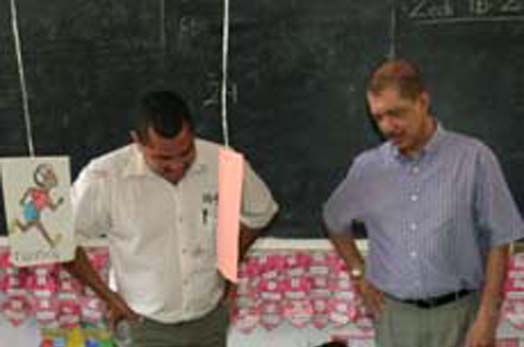 President Michel said that he will continue to go in the community, and consult people so that he can listen to people and address their concerns, as well as getting to know the aspirations and the difficulties of the people more closely.

"It gives me great hope to see Praslinois taking their island forward; the way they are transforming the island is a real inspiration. Today if we can deal with the problem of drugs, then Praslin can become a model of development, it has enormous potential. Praslinois are ready to take their destiny in their hands and develop businesses, many people I have met have taken up this challenge," said President Michel following his visit.

"I am launching an appeal with the Commissioner of Police and agencies fighting drugs to give special attention to Praslin. People on Praslin know who the traffickers are, so we need to address this problem. I have this to say to the traffickers: I will not let you rest, I will make sure we harassÂ  you until we catch you and put you in prison. We need to clean-up the island, remove the drug traffickers, and protect the inhabitants of Praslin from the drugs."

Following a tour of one of the farms of l'Amitié, the President noted that the farming community on Praslin was developing well. He listened to the concerns of some farmers who said they had difficulties selling their produce to hotels, because of the competition of foreign imports.

The President visited several small hotels and guest houses on Praslin and was told that the occupancy level was good.

During the visit, President Michel said he had seen a fantastic tourism concept that has been developed on Praslin; a museum of traditional Seychellois life; with traditional food, medicine, and exhibition of the way Seychellois life used to be in the past. He said it was important to develop niche markets for tourists.

"This is an excellent attraction, and it will enrich Praslin, as well as other islands who should take up this concept." said President Michel.

The President said that Praslin has 600 small businesses that have been financed through small business loans, and that this is an indication of the thriving opportunities for small businesses, which are making Praslin one of the richest, per capita, islands of the country.

President Michel also met with the school children who had recently been involved in a serious bus accident.

" I came to talk to them about the trauma they went through and to reassure them that governmentÂ  is giving them the support they need to overcome it. The two students who are undergoing treatment in Abu Dhabi are recovering well."

The President also toured the Grand Anse Secondary and Primary schools to see the way are they functioning.

"They are doing very well although there are things we need to improve. I have asked the Minister for Education to come and assess their needs, particularly the need for teachers and furniture in the schools," said the President.

The President also asked the Police to intensify its investigation in the possible gas leak which affected students and teachers recently.

During his visit to the Baie Ste Praslin hospital, the President said that this hospital needs to be able to meet the demands of Praslinois; and be better equipped to improve the service and facilities of the hospital. The President was accompanied by the Minister for Health Dr. Erna Athanasius, who was present to view the problems at the hospital and take note of the actions needed to address them.

"We will consider the possibility for providing a dialysis machine for patients with kidney problems on Praslin as soon as possible, so that they do not need to go to Victoria hospital for this treatment," said President Michel.