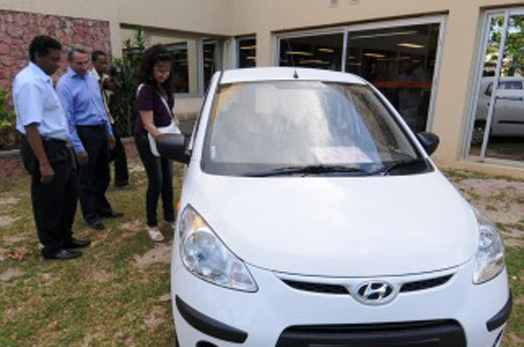 Rendez-vous for an even better National Show

July 12, 2010 -- The National Show,Â the highlight of the June 18 National Day celebrations, will next year be even better, Vice-President Danny Faure has promised the public.

This was during the prizegiving ceremony for winners of the National Day lottery and the presentation of awards to sponsors and others who helped organise the event.

Present at the Sea Front restaurant on Thursday afternoon were principal secretary in the VP's Office Jeanne Simeon and members of the National Day organising committee and National Show coordinating committee.

Mr Faure, who is also the chairman of the national celebrations committee, said the ceremony marked the closing of this year's National Day event.

The national exhibition showcased what public and private companies had to display and share with members of the public and with other businesses and enterprises, he said.

Mr Faure said it was a classic example of a new and vibrant partnership and a strong collaboration between the government and industry.

"It showed our entrepreneurial spirit, our desire to do something well, our pride in demonstrating what we can achieve as a nation when we come together for one common goal," he added.

The National Show featured a variety of events, from business displays to artistic shows and sports activities.

There were in all 199 individuals and companies who took part, ranging from small cottage industries to large businesses and corporations.

Mr Faure said the quality of products on display and the level of service were commendable.

"Those who took part have shown us what we can come up with given the motivation, encouragement and opportunity," he said.

He added that the government has decided to make the National Show an annual event to commemorate National Day, with Patrick Andre remaining as its coordinator.

He also announced that next year, to celebrate the 35th anniversary of our independence, the National Day lottery will be organised with the star prize being a plot of land and a house.

Mr Faure said this follows up on a commitment made by the government "to maintain the initiative we started when we celebrated the 30th anniversary of our independence four years ago".

He also thanked the organisers of the show and all those who took part, including sponsors.
The highlight of the ceremony came when the National Show lottery winners received their prizes. The winner of the star prize - a brand new white Hyundai i10 car - was Allen Laporte, a Seychellois who lives in Canada.

His prize, sponsored by PMC Auto, was collected by his sister Lydia Loizeau, and Mr Faure handed her the keys to the car which is worth around R188,000.

She said they always buy lottery tickets for their brother even though he is abroad, and this time they bought a whole booklet. The family were happy to hear the good news as they did not expect to win, and they have decided to sell the car.

The second prize winner, Sheila Boniface from Les Mamelles, got R25,000 sponsored by the Indo-Seychelles Friendship Association, while Jean-Yves Pierre of Mont Buxton won the third prize, a ticket for two to Paris sponsored by Air France.
Â
There were other airline tickets to various destinations for other winners, and 10 consolation prizes of R500. A total of 49,999 tickets were sold for this year's National Day lottery.
Â
Â