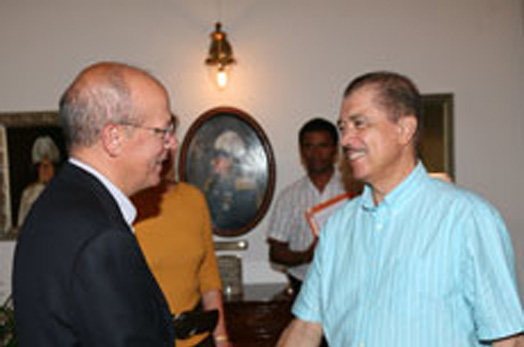 "Â  We are partners in the struggle against piracy. With the aid of Portugal and the European Union as a whole, we are limiting the effects of piracy in the region. We have achieved the best that we are able to with the limited resources that we have," said President Michel during the meeting.

Minister Santos Silva said that Portugal would continue to aid the maritime and air-based Atalanta operations in the Indian Ocean, as well as contributing to the peacekeeping operations on mainland Somalia, in order to address the root of the piracy problem.

"Seychelles is playing a very important role in the fight against piracy. We emphasise the regional approach to piracy, as well as finding a solution to the problem in Somalia," said Minister Santos Silva.

President Michel agreed with the Minister, adding that "It is important that the international community addresses the problem of mainland Somalia, and helps to find a lasting solution to this failed state."

The President and theÂ  Portuguese Minister of Defence also discussed on the work of the Portuguese Air Force Detachment which was deployed to Seychelles in April this year as part of the EUNAVFOR Atalanta Operation.

Â " The Portuguese air force surveillance operation is very important for the Seychelles anti-piracy effort as we rely on the data to intercept pirates. This has proved to be a very productive operation," said President Michel.