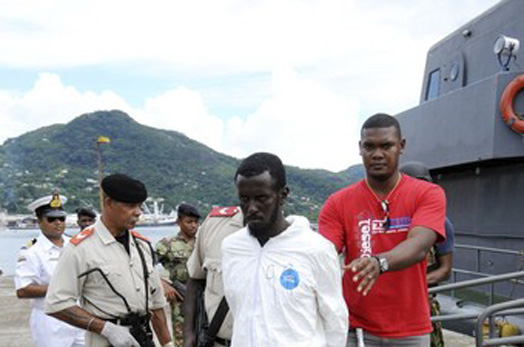 March 29, 2010 -- The High Level Committee on Piracy has confirmed that all 6 Seychellois crew members of the Galate fishing vessel are safe and in the custody of the Seychelles Coast Guard, following a piracy attack last night.

The High Level Committee was informed of the piracy attack last night at 0200hrs, 90 miles South East of Mahé island, and the Seychelles Coast Guard vessel Topaz was immediately dispatched in pursuit of theÂ  hijacked vessel.

Together with the assistance of an EU Maritime Patrol Aircraft, the Topaz located the position of the dhow, which was towing the Galate and tried to engage with the vessel. The pirates responded in a threatening manner and the Topaz fired several warning shots.

The dhow continued to travel towards Somalia, with Topaz in pursuit.

President James Michel, the Commander-in-Chief, gave the orders for Topaz to intercept the vessel and ensure that it did not reach Somalia.

This afternoon the Topaz disabled the dhow by firing at the engine of the boat, which resulted in a fire onboard the dhow. The pirates , the Iranian crew as well as the Seychellois men onboard jumped into the sea.

The Topaz picked up all the 6 men Seychellois men at 4.30pm from the sea; Joel Julienne, Francis Leon, Emmanuel Victorin, Richard Bossy, Roland Lablache and Antoine Basset are safe.

The Seychelles Coast Guard has also rescued all the Iranian crew members, and among them 1 Iranian man has been injured, with a gunshot wound to the upper arm. All the Somali pirates have also been retrieved from the sea.

The President said that he was thankful that all the Seychellois had been successfully rescued and would soon be returned to their families.

"We all remember the pain and uncertainty when our compatriots on board the Serenity, Indian Ocean Explorer and Alakrana were being held hostage by pirates last year.Â  We were determined that such incidents do not repeat themselves, and it was important that the vessel not be allowed to reach Somalia," said President Michel.

The President also praised the Armed Forces for the professionalism of their actions and their courage in the face of the threats in front of them. The Topaz had been fired upon by rocket-propelled grenades by the pirates, and had successfully evaded them.

"Our men on board the Topaz have shown that they are capable in dealing with piracy in the most difficult of circumstances.Â  They showed very determined, professional and brave action. The fact that they have managed to liberate our compatriots is testimony to the hard work they have put in over the last year to ensure that Seychelles is ready to deal with piracy.Â  Our Armed Forces have risen to the challenge and we are all proud of them."

The Chairman of the High Level Committee on Piracy, Minister Joel Morgan has also heralded the performance of the operation which involved the cooperation of many partners.Â  Minister MorganÂ  also pointed out that Topaz's decisive action has further justified the passing of the amendment to the law on piracy last week.

"'This operation has dealt a serious blow to the way in which pirates operate by attacking unarmed vessels.Â  We have shown we will not let them get away with it.Â  Our newly amended law also clearly lays down the way in which we can engage them in combat.Â  In this operation Topaz had to pursue them outside our EEZ and all our military officers were reassured in that their actions were situated within a clear legal context," said Minister Morgan. The Minister also thanked the EUNAVFOR for their assistance and valued cooperation during this mission.

The Topaz is currently 250 nautical miles north west of Mahé and is expected in Victoria tomorrow afternoon.